Building a Community for Professionals

Four years ago, myself and a couple of other tech nerds joined forces with HackerNest to create a local Chapter in our community. HackerNest is a global organization which brings together technology enthusiasts in a safe and relaxed environment where the only rule is: “Don’t be a jerk”.

The idea was to bring people together - workers, hobbyists, nerds at heart - each month to have free beverages and…. Connect. You see, technology enthusiasts

generally work in isolated environments. Not to mention, the conversation at the family dinner table is usually met with glazed eyes because most people don’t understand the programming language or care to follow the latest gizmo release. So bringing together local nerds provides a necessary outlet for people to share, meet and grow.

So HackerNest Peterborough was born.

I remember thinking that our first event would have maybe five people out. Peterborough isn’t really a tech hub so we were all very shocked when around 75 people filled a cramped little gallery space we had booked. Now, to be honest, I recall that about half of those in attendance were non-nerd friends of the nerds because they didn’t want to come alone. But still… a lot of support for the little meetup. 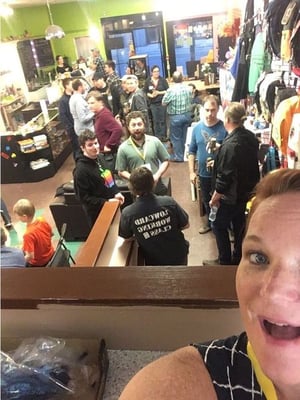 Time went on and we established a core group of ‘regulars’ and people started forming off in sub groups. Game developers, web developers, gadget people, IT people and so on. It was truly magical to be part of bringing together the tech community and watching new friendships start. Hearing people say that they were thankful to finally feel like they belong somewhere.

Big things happened too… there were casual mentoring coffee dates between experienced nerds and students. Some game developers pulled together enough critical mass to coordinate a few game jam events drawing in people from other cities. There was a global hackathon (for good) that was organized by HackerNest that some of our members took part in. A small group met for breakfast on a monthly basis to nerd out between meetups. We created a slack channel where we helped each other find work, listed hardware for sale, and connected people to other industry experts.

Admittedly, I’m not much of a nerd other than I’m a bit of an early adopter… I’m not afraid to break things but I couldn’t possibly fix them. Personally, I am humbled that these uber-smart people were decent enough to let me be part of their world. Since I’m a bit of a social butterfly, I became a bit of an ambassador for the group. I slowly became fondly referred to as the “nerd wrangler” and non-tech people would reach out to me if they were looking to solve some tech related problems.

Just recently, I decided to step down as a co-founder of HackerNest Peterborough. Largely because it was getting increasingly difficult to really coordinate and promote and do all the things that come with hosting a monthly meetup event. I’ve been so grateful to have been part of something that not only allowed me to make new, lifelong friendships but also watch other friendships nurture and grow. I am ever thankful to have had the support of local businesses like Peterborough Chamber, FlemingSAC, Showplace Peterborough, Locale Contract,  Innovation Cluster, Publican House , acorn30, The Monocle, Dodrio, Camp Kawartha, Cardinal Software and Retro E-Sports who hosted us. As well as Publican House who supported us on day 1 by being our beverage sponsor (Cheers!)

Four years was a lot of work, arranging and coordinating and being an ambassador for the tech community in Peterborough. But I am so happy to have had the opportunity to meet so many awesome people and be part of the vibrant community that I completely under-estimated.

To all of those who attended regularly and made it a priority to support the community. My hat is off to you all. My life is significantly better because of you. Thank you for letting me be part of your world.

“As a Creative Director for acorn30, Heather’s primary role is driving strategy for our marketing clients.”

The regulation of user privacy must consider potential future applications of any collected...

Building a Community for Professionals

Four years ago, myself and a couple of other tech nerds joined forces with HackerNest to create...